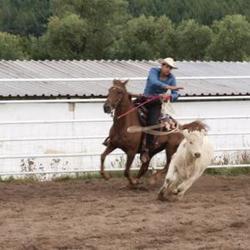 It is a time discipline. The arena is divided by line when the cattle side is one-fifth the length of the arena. A herd of numbered calves are on the cattle side. The rider separates a chosen calf from the herd, drives it behind the line and catches it on non-cattle side. The valid throw means catching any part of the calf's body on the non-cattle side. Discipline is finished by “deli” (wrap the lasso on the horn) and by followed releasing of Honda. Timing is completed at the time of opening of Honda. Time limit is 1 minute and the rider has an unlimited number of throws. In this discipline must use the lasso with launched Honda. The use of reins, whip and lasso, and other similar devices for pushing the selected cattle is prohibited. During the separation and lassoing may run any number of calves to non-cattle side.